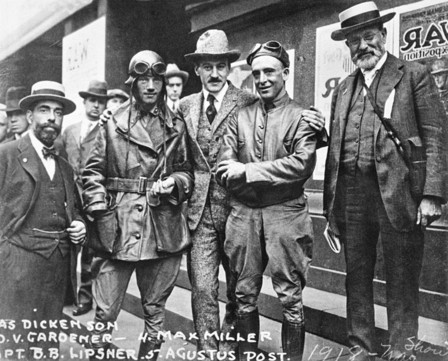 The parties lasted three days when the airmail came to Chicago for the first time in 1918. Here, Air Mail superintendent Benjamin Lipsner centers the pilots who made it possible--Max Miller (left) and Eddie Gardner (right).

Set against the backdrop of the Jazz Age, with its glittery café society and Prohibition-era speakeasies, this action-packed adventure reveals the great heroics and desperate efforts involved in creating the world’s first airmail service. Leading the charge against a hostile Congress and ruthless railroad barons controlling the nation’s commerce is Otto Praeger, a tough-talking Texan and former newspaperman who bears a noble vision for what aviation could mean to the future of America.

Praeger is hard driven, passionate and defiant of the odds. To fly Uncle Sam’s mail, he chooses a team of like-minded zealots: racecar drivers, WWI pilots, and barnstormers. They are a brazen lot, dashing and headstrong, and always resentful of his authority.

Certain that the airplane can bring prosperity to the American people, and backed in that belief by the progressive Democratic administration of President Woodrow Wilson, Praeger proves himself the tenacious taskmaster, pushing men and machines to their limits. His “fly or be fired” dictum, regardless of the weather, leads to the deaths of one-quarter of all mail pilots. The job of flying the mail is so perilous that the media nicknames the U.S. Airmail “The Suicide Club”.

Personally conflicted by the deaths and the ramifications of his policies, Praeger nonetheless can’t afford to ease back on the throttle. He establishes a successful sky route between New York City, Philadelphia and Washington, D.C., but knows that success or failure of airmail rests on the ability to deliver the mail over longer distances and do it faster than the railroads. He pushes the service westward, connecting the East Coast with Cleveland, Chicago and St. Louis.

Despite his best efforts, airmail is in shambles three years after its inauguration. Public skepticism, hostility over the pilot deaths and huge cost overruns has the nation calling for its end. The service appears all but finished when the Republicans win the presidency in 1921. They waste no time in signaling their intention to cut all funding for airmail and give the money back to the railroads. A political appointee, Praeger is about to lose his job and also the fledgling service to which he has staked his career.

With airmail hanging in the balance, Praeger hatches a bold and desperate plan, the success of which will guarantee the future of the service—provided he could pull it off. A relay team of four pilots will fly the mail nonstop between New York to San Francisco, and do it in 36 hours instead of the usual 4 days it takes the railroad. That means, however, doing something that no sane person has ever attempted—flying in the total darkness of night.

The audacious plan quickly catches the imagination of the media, who whip the public into a frenzy of anticipation. In a rousing climax, thousands of people across the Midwest build bonfires to light the night sky, providing beacons for the pilots above.

Still, with one pilot killed on takeoff, and another two stopped by mechanical problems, it falls to one man—a soft-spoken cowboy named Jack Knight who has the blood of a homing pigeon in his veins—to see it through. Despite the overwhelming challenge, Knight survives the run, turning himself into an American icon and saving the airmail service in the process.

Veteran defense reporter Barry Rosenberg and columnist Catherine Macaulay have brilliantly combined the romance and danger of the dawn of flight in a dramatic story that captures the courage and daring of the near-mythic men and women who brought commercial aviation to America by flying the world’s first regularly scheduled airmail service.

We are excited about the commercial potential of MAVERICKS OF THE SKY as a feature film or documentary. It is a classic of its kind, an action-packed adventure that will captivate audiences with its glamour and energy, depicting, as it does, the quintessential American hero—whose dedication, hard work and perseverance brought to life a dream and changed the world for the better. 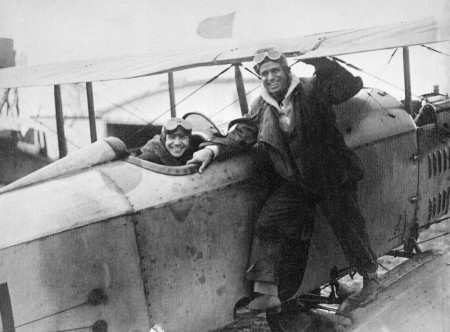 Hollywood and aviation have long gone hand in glove. During WWI, actor Douglas Fairbanks airmailed himself from Washington to NY to raise money for Liberty bonds. Here he poses on the wing with pilot Robert Shank.

Below are some additional reasons why we believe MAVERICKS OF THE SKY will appeal to progressive-thinking actors and directors.

* In years past, government actually worked for the people it served. Never

was this more evident than roughly 90 years ago in l9l8 when the progressive Democratic administration of President Woodrow Wilson invested the equivalent of $1.5 million in today’s dollars into a new technology called the aeroplane. The president and his advisors believed these new, open cockpit biplanes could provide an invaluable benefit to the nation and its people. They would use them to fly the mail and, in doing so, they consciously set out to lay the groundwork for today’s global aviation

* Republicans in Congress called the venture "reckless" and did everything

in their power to kill it. The Wilson administration should get its head out

of the clouds and get down to "terra firma". Delivering letters by air was

nothing more than an expensive fad, they said, barely hiding the fact that

they were in the hip pocket of the railroad barons, who had the most to lose

from the airmail. If the people needed the airplane then the private sector

would develop it, they argued. But a number of visionary Progressives held

firm, convinced of the aeroplane’s future potential and believing it their

* Despite the furor, the United States became the first country in the world

grandfather fought alongside Sam Houston in the Mexican-American war) and his assistant Otto Praeger (the tough newspaper reporter who was the son of German immigrants) turned the post office into a flying laboratory—intent upon solving the problems of aviation.

* Flying Uncle Sam’s mail was both expensive and dangerous. One quarter of all the airmail pilots were killed during the first three years of operation.

Nicknamed "The Suicide Club" airmail pilots had only their wits and

instincts to keep them out of trouble. They were a dashing lot, brazen and

often resentful of authority. They were also determined to prove their

detractors wrong. Day after day, they climbed into their flimsy wood and

cloth-covered biplanes and moved the mail, eager to show that airplanes were more than just weapons of war.

* In the course of three short years, the men of the U.S. Postal Department

established a network of airmail routes that criss-crossed the country. In

invested in the future of America, creating the infrastructure for our

pilots and progressive politicians who were responsible for one of the