Question and Answer session with Barry Rosenberg and Catherine Macaulay 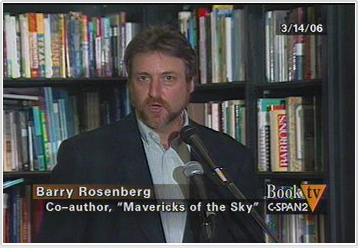 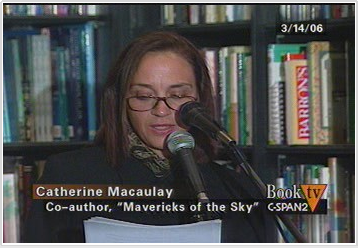 In an hour-long segment on C-SPAN2's Book TV, co-authors Barry Rosenberg and Catherine Macaulay discuss Mavericks of the Sky at Book Soup in West Hollywood, California.

1. How did the idea for the book originate?

The idea for the book germinated with us about 10 years ago. Barry is a journalist covering aerospace and defense, and Catherine is a humor columnist and writer. Interestingly enough, Catherine discovered the story of airmail’s founding and thought it would be an interesting project for us to work on together. We’re married and have been together for more than 25 years.

What we discovered in doing our initial research was that so many of the original airmail pilots died while flying the mail for Uncle Sam. During the first three crucial years of the airmail, from 1918 to 1921, a total of 26 pilots, mechanics and field personnel were killed. Airmail averaged one fatality a month, and an airmail pilot could expect to fly less than two years before dying on the job. It was clearly the most dangerous job in the world.

Sadly, the accomplishments of those daring young men had been lost to time. They died as young men, most in their 20s. For the most part they didn’t have families or children to keep their names alive, or record for history what it was that they did for our country and for the greater world at large.

And what they did was no less than lay the foundation for today’s worldwide aviation industry—from the point of view of both the manufacturers and the airlines. Until the United States Post Office came up with the idea of flying the mail, the U.S. government had never bought an airplane that wasn’t a weapon of war. In fact, there was no such thing as a commercial aviation industry until the post office created it by buying the very first civil airplanes for the government.

And it wasn’t until the post office proved the possibility of regularly scheduled airmail service that the private sector was able to step in and take over the established airmail routes. It was from those original airmail routes that sprang companies that would later be known as United Airlines, Delta Air Lines and Trans World Airlines, amongst others.

2. Did you have trouble finding source material? Was there anything you found surprising when writing or researching this work?

Well, yes and no. As mentioned, most of the original airmail pilots died as young men so there were few first-person accounts for us to draw upon. That said, we did travel from one end of the country to the other in search of material. For example, we visited the University of Texas at Austin to study the archives of Albert Sidney Burleson, the postmaster general during the administration of President Woodrow Wilson, as well as the University of New Mexico at Albuquerque, to see the papers of Katherine Stinson, the first woman to fly the mail. We visited many other places as well, including: the archives of United Airlines in Chicago, which held material related to pilot Jack Knight and E. Hamilton Lee; the town of Bellefonte, PA, to experience the terrain in the Allegheny Mountains; and also the archives of Belmont Race Track, which was the original northern terminus of the airmail service.

And, this being a government operation, there was an enormous number of airmail records stored at the Smithsonian’s Air & Space Museum and Postal Museum, as well as the National Archives. This included everything from pilot accident reports to the press releases issues by Second Assistant Postmaster General Otto Praeger, who was responsible for the day-to-day operation of airmail.

The most surprising thing we discovered about the founding of airmail was the number of U.S. congressmen who were against funding development of airmail. The post office had to scratch for every dollar and it took years to convince Congress to appropriate $100,000 to establish the service.

Republicans in Congress called the venture “reckless” and did everything in their power to kill it. Delivering letters by air was nothing more than an expensive fad, they said. The train worked well enough. If the people needed the airplane then the private sector would develop it. But a number of visionary Progressives held firm, convinced of the airplane’s future potential. Believing it their solemn duty as public servants to uncover, fund and develop emerging technologies, they were prepared to underwrite its development until such time as it could pay for itself.

In the course of three short years, the men of the U.S. Postal Department established a network of airmail routes that criss-crossed the country. In underwriting airmail, the Wilson administration bucked convention and invested in the future of America, creating the infrastructure for our entire commercial aviation and airline industry.

3. How did the public view these pilots? Were some as well known as say Lindbergh, Rickenbacker? Were they thought of as brave or merely daredevils?

Other than the fighting men of the U.S. armed forces during World War I, the pilots of the U.S. Air Mail were considered the true heroes of the day. They were men willing to risk their lives in flimsy wood and canvas open-cockpit biplanes just for the sake of speeding delivery of mail. For that, they were thought of as both brave and foolish in the same breath. When an airmail pilot landed in a small town, everyone from the baker to the mayor rushed to the field to glimpse these leather-clad birdmen, as they were called. Everyone wanted to be them, and even swashbuckling Hollywood movie actors like Douglas Fairbanks wanted to emulate their look. When an airplane crash took the life of airmail’s most experienced pilot, Max Miller, in 1920 it made front-page news across the country.

4. The photos of the pilots are almost psychological portraits of boldness and charisma. How important was this pictorial image in the profile of these Air Mail Pilots? Did their dashing personas cause resentment with their superiors or bureaucrats?

Throughout the years that we researched and wrote MAVERICKS OF THE SKY we always felt that we were accompanied by the spirits of the men who established airmail 95 years ago. In the early stages of researching MAVERICKS we visited with Meg Ausman, the librarian for the U.S. Post Office in Washington, D.C. (who is still there). In her office, Meg has a life-size cardboard cutout of a pilot tucked into the corner of the room. It was William “Wild Bill” Hopson, and we were inexplicably drawn to his steely gaze and confident stance. He was a man’s man, and affected both men and women similarly. We tacked up the image of Hopson over our desks and turned to him for inspiration while writing the book. We also chose him for the cover of the book, knowing he would have the same affect upon everyone who saw him. We even hired a company to make our own life-size cutout of Hopson and we brought him with us on our book tour.

It is possible that the bureaucrats who ran the post office may have resented the fame, good looks and charisma of some of the pilots, but we didn’t detect any in our research. Both Postmaster General Burleson and Second Assistant Postmaster General Otto Praeger were powerful men in their own right, each extremely self-confident. Burleson’s grandfather was General Edward Burleson, who fought alongside Sam Houston at the Battle of San Jacinto, and he himself served 14 years in Congress and another 8 as an influential member of Woodrow Wilson’s cabinet. And though only 5’5” tall and balding, Praeger had spent two decades as an influential newspaper reporter, rising to Washington correspondent for the Southwest’s most important paper, the Dallas News.

5. What, (if any) were the differences between the mail pilots and some of the fighter pilots?

There was really no difference between airmail pilots and fighter pilots. In fact, all of the original airmail pilots were military flight instructors with hundreds of hours of flying time in their logbooks. Initially, some airmail pilots even resented the job when the U.S. Army assigned pilots to the job. They would rather have been flying combat in Europe than transporting letters between New York and Washington, D.C.

5. Who do you consider the hero of the book? Would their story make a good film? Who would you cast?

Beside the obvious heroes—the airmail pilots themselves—the true hero was Second Assistant Postmaster General Otto Praeger. He was responsible for all transportation activities of the post office, and even in the face of mounting deaths and congressional hostility he stuck to his belief that it was the responsibility of government to encourage development of such new technologies and that the airplane could become a useful tool for commerce. Praeger turned the post office into a laboratory for flying—intent upon solving the problems of aviation. Everything from the nation’s first radio stations to its first weather reports was implemented during his six years as second assistant postmaster general. We view the actor Ed Harris, in his Apollo 13 role as flight director Gene Kranz, to be very much the sort of person we imagined Otto Praeger to be.

Many people have told us that they think MAVERICKS would make a good film, and we hope that it happens one day.